May data on inflation showed price increases unexpectedly accelerated last month, with consumer prices rising 8.6% year-over-year in May, the most since 1981. Consumer sentiment data released Friday morning came in at a record low, as inflation weighs on American households.

The S&P 500, Dow and Nasdaq dropped sharply following the print, with the Nasdaq losing as much as 3% in morning trade. The S&P 500 and the Dow were both down more than 2% early Friday.

Treasury yields spiked especially on the short end of the curve, and the 2-year yield jumped to top 2.9%. The benchmark 10-year Treasury yield rose to nearly 3.1%. U.S. crude oil prices pulled back, falling about 2% to around $119.40 per barrel, after rising above $122 per barrel earlier this week.

For market participants, the Bureau of Labor Statistics’ release of the Consumer Price Index (CPI) was a key print, offering a fresh look at the extent to which price increases have persisted across the U.S. economy. The index unexpectedly accelerated to post an 8.6% annual increase in May, following April’s 8.3% rise. That marked the biggest jump since late 1981, and took out the prior 41-year high set in the March CPI, which rose 8.5%.

On a month-over-month basis, CPI also jumped by 1.0%, or more than the 0.7% rise expected, and April’s 0.3% increase. Core inflation, which excludes volatile food and energy prices, increased 6.0% on an annual basis after April’s 6.2% increase.

Inflation has remained a dominant issue for investors, policymakers and the American public this year. Higher prices have threatened to weigh on consumer spending — the key driver of U.S. economic activity — as goods and services become increasingly unaffordable. Inflation has already shown signs of triggering a rotation from spending on some discretionary goods to other purchase areas. And on Friday, a closely watched consumer sentiment index slumped to a record low as inflationary concerns weighed on Americans.

And for investors, inflation has also become a key determinant in the path forward for the Federal Reserve’s monetary policies. As the Fed aims to help bring down fast-rising prices, the central bank is widely expected to raise interest rates by another half-point at next week’s policy-setting meeting, further increasing the cost of borrowing and doing business for companies.

Amid these concerns over inflation’s impact on the economy and Fed’s next moves, stocks have continued to trade choppily. Each of the three major averages was on track to post a back-to-back week of losses, based on Thursday’s closing prices. The S&P 500 headed for a weekly decline of about 2%.

“At the end of the day, markets are just faced with a whole lot of uncertainty right now. And it’s not just that inflation story,” Jack Manley, global market strategist at JPMorgan Asset Management, told Yahoo Finance Live on Thursday. “We have still some uncertainty, some lack of clarity around what the Fed is going to do. The war in Europe continues to rage. And we know there are new developments happening on that front every few days.”

“There’s a lot to digest right now. And without any sort of real clarity on these things, it’s hard for markets to meaningfully move higher or lower,” he added. “It’s all markets really want at the end of the day, is news. And no news is bad news.”

Our inboxes were flooded Friday morning with economist reactions to the May inflation data, and several shops used “nowhere to hide” as their main hook for talking about this data.

But this framework applies to the market as well on this ugly Friday morning.

In the true risk-off part of the market, ARK Innovation (ARKK) is down over 6% and the 2021 class of SPACs and IPOs are under pressure as well. These have been some of the best performers in the rally we’ve seen investors try to put together over the last few weeks.

“The Generals” — the group formerly known as the FAAMNG stocks — are all down more than 3%, however, showing the widespread stress Friday’s action is putting on investors. Apple (AAPL), which has held up better than any of the other mega cap tech names through this market sell-off, is again the most durable performer, falling 3.5% in morning trade.

Consumer Staples (XLP) is the best performing sector so far in today’s trading, down just 0.4% and rallying since the open. Grocery stores are the lone bright spot in the market today, as higher food prices will likely pass through to these companies’ bottom lines in the coming months.

Consumers sentiment fell to its lowest-ever recorded level in early June, with rising prices at the pump especially weighing on Americans’ wallets.

The University of Michigan’s preliminary June consumer sentiment index dropped to 50.2, or an all-time low since the institution began tracking the data. This followed May’s index reading of 58.4, and missed estimates for 58.1, according to Bloomberg data.

“Consumer sentiment declined by 14% from May, continuing a downward trend over the last year and reaching its lowest recorded value, comparable to the trough reached in the middle of the 1980 recession,” Joanne Hsu, director of the Surveys of Consumers for the University of Michigan, said in a statement.

“Consumers’ assessments of their personal financial situation worsened about 20%,” Hsu added. “Forty-six percent of consumers attributed their negative views to inflation, up from 38% in May; this share has only been exceeded once since 1981, during the Great Recession.”

Hsu also noted that half of all surveyed consumers mentioned gas unprompted in their interviews, up from 30% in May.

9:03 a.m. ET: Stock futures accelerate to the downside after hot May CPI print

Record-high US inflation has analysts gloomy

Fri Jun 10 , 2022
Economists trying to find a sign that the country’s financial wellness was turning a corner ended up remaining reeling right after the federal government launched info indicating that inflation rose at a rate not observed in a lot more than four many years. Client charges surged 8.6% previous thirty day […] 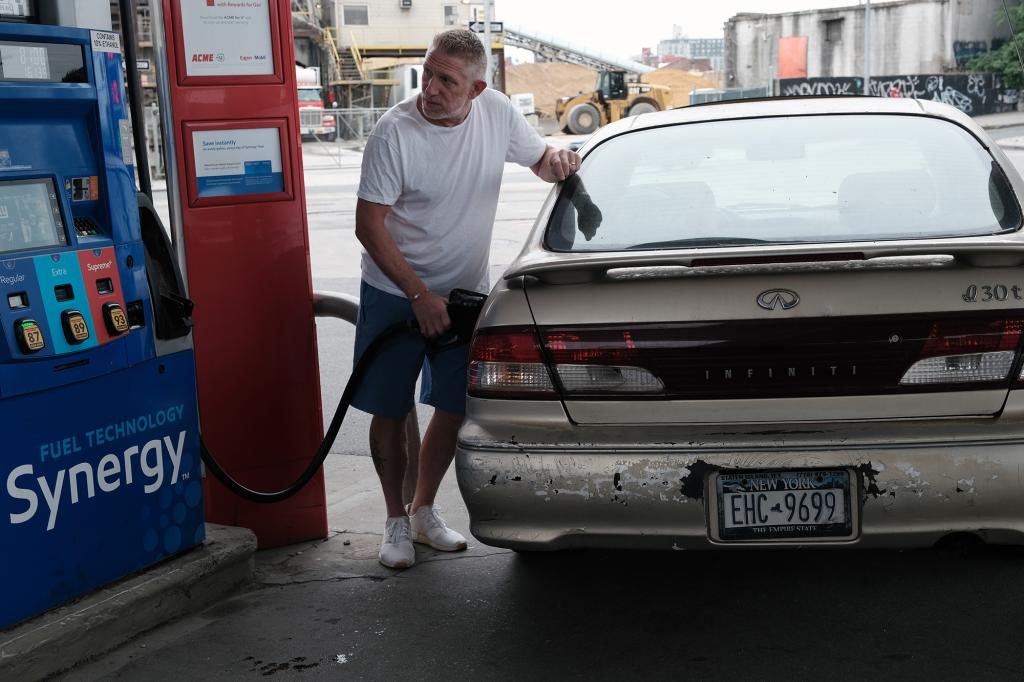